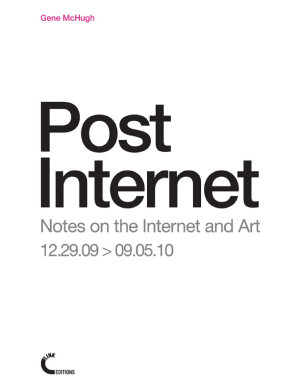 Post Internet is a blog developed between December 2009 and September 2010 by the New York based art critic Gene McHugh, thanks to a grant of the Creative Capital | Andy Warhol Foundation Arts Writers Grant Program. For almost a year, Gene McHugh kept filling this folder with his personal notes. Writing and posting became a daily, regular activity, that sometimes produced many posts a day, sometimes long (or very long) texts posted at a slower pace. However, Post Internet is not just a piece of beautiful criticism, as reading this book proves. It's also, in itself, a piece of Post Internet art in the shape of an art criticism blog. GENE MCHUGH is an art writer and curator based in Brooklyn. His writing has appeared in Artforum and Rhizome. McHugh is currently the Kress Fellow in Interpretive Technology at the Whitney Museum of American Art.

Authors: Gene McHugh
Categories: Reference
Post Internet is a blog developed between December 2009 and September 2010 by the New York based art critic Gene McHugh, thanks to a grant of the Creative Capit

Does the Internet Have an Unconscious?

Authors: Clint Burnham
Categories: Literary Criticism
Does the Internet Have an Unconscious? is both an introduction to the work of Slavoj Žižek and an investigation into how his work can be used to think about t

Authors: Isobel Harbison
Categories: Social Science
An examination of how artists have combined performance and moving image for decades, anticipating our changing relation to images in the internet era. In Perfo

Authors: Charlotte Gould
Categories: Art
The Artangel Trust has been credited with providing artists with all the money and logistics they need to create one-off dream projects. An independent art comm

The Routledge Companion to Digital Ethnography

Authors: Larissa Hjorth
Categories: Social Science
With the increase of digital and networked media in everyday life, researchers have increasingly turned their gaze to the symbolic and cultural elements of tech

Authors: Professor of Sociology Jeylan T Mortimer
Categories: FAMILY & RELATIONSHIPS
This book examines changes that are likely to impact adolescents' lives and their futures as adults.